Whiffenpoofs Strike a Chord at Poly 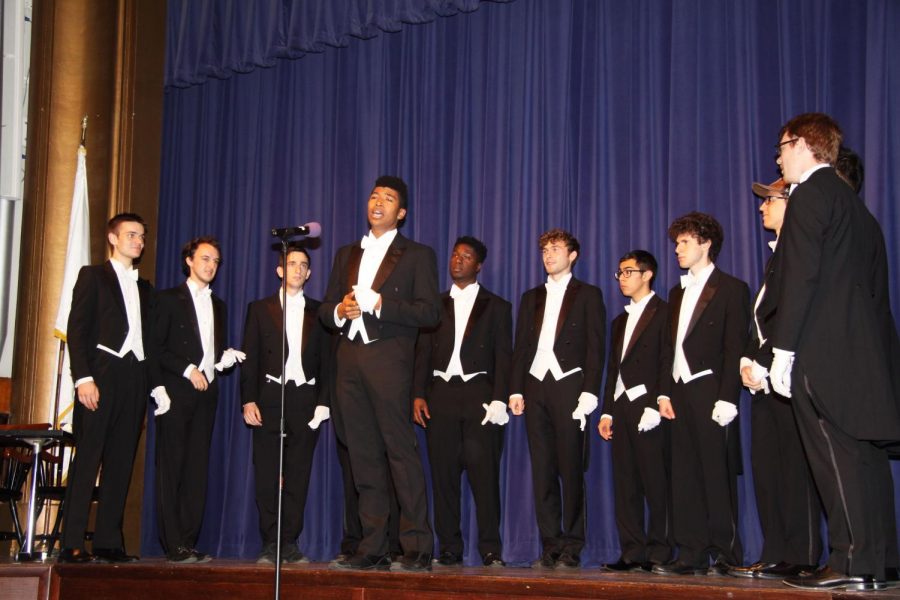 Just as students thought the assembly was about to end, Head of School Audrius Barzdukas approached the podium and proudly introduced the group. Dean of Student Life Pamela Pollock, along with the Assembly Committee, organized the event. The Assembly Committee consists of a group of students who invite speakers and plan for future assemblies. The Whiffs was the first musical group from outside of Poly to perform during assembly this year.

Senior Nick Devito is one of many students who was pleasantly surprised by the Whiffs’ unexpected concert during assembly. Devito, who plays saxophone in the jazz band, found the introduction of musical groups from outside of Poly refreshing.

“Poly usually doesn’t bring in outside groups. They usually try to highlight groups within Poly,” Devito said. “I think the Whiffenpoofs were a good example for people who want to do something in the performing arts.”

The Whiffs are comprised of 14 seniors who go through a rigorous audition process late in their junior years. Following tradition, they take a year away from Yale’s campus to tour both domestically and internationally, and have already completed most of their Midwest tour.

Ian Billinge, a current Whiff from Brooklyn, said that although joining the Whiffs is a huge commitment, many members of the group pursue internships or independent studies in between their demanding tour schedule. Billinge chose to join the Whiffs to further his singing career, which he said began at 10 years old when he joined his first choir.

“I really love the Whiffs’ sound and the Whiffs’ look,” Billinge said. “I’m a very old-fashioned kind of guy, so the long tails and white gloves appealed to me. What we sang for you, believe it or not, was the more modern side of the rep.”

During the performance, students pulled out their phones to record the music and cheered loudly when a song ended. The Whiffs opened with the slow song “Nature Boy” and followed with the classic song “Rainbow Connection.” They ended the performance singing the esteemed “Whiffenpoof Song,” which has been sung at the end of every concert since the group’s founding in 1909.

Like Devito, many students had positive reviews of the Whiffs’ performance. Senior and Student Body Vice President Ellen Gaffney said that some students were even emotionally moved by the performance. “They made [my friend] cry,” Gaffney said. “Their voices were amazing and surprisingly beautiful.”

The Whiffs brought energy and spirit to the Poly community at 8:30 in the morning, and told witty jokes in between slow melodies. Billinge said that this energy is what attracts him to music and is what pushes him to pursue his passion.

“There’s a really special feeling when you’re up on a stage performing in front of a group of people in unison,” Billinge said. “You really have to understand how that brings people together.”