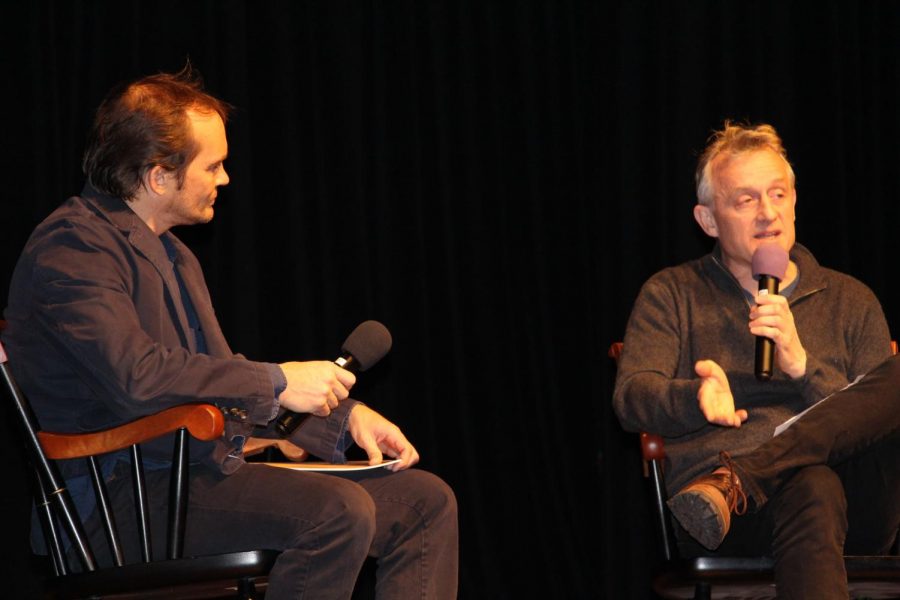 In a 2016 issue of The New Yorker, Burkhard Bilger describes his grandfather as a grave man with gray hair and a glass eye. Bilger details how his grandfather would sometimes give him a piece of honeycomb to chew when he was young, “Strange, like him,” Bilger writes, “with its chambered secrets, but also sweet.”

The article in which he describes his grandfather is a personal history, deeply intimate, unflinchingly honest in how he details the shame ingrained in German post-war genealogy. Bilger is currently working on a book detailing the life of his grandfather, a man named Karl Gönner, who joined the Nazi party in 1933 and became a Party Chief in the village of Alsace during Vichy France.

Bilger has the tendency to describe people as characters, as though they are just as fantastic and extravagant as the silly accents and grand gestures he uses to punctuate their personalities when he read a selection of works to the Upper School on Friday, January 19th. From a Czechoslovakian shoe maker obsessing over the state of the world’s feet to a crossword puzzle maker living a double life as a drag queen, Bilger fully embodies the personalities of everyone he writes.

This adept skill for the most intimate level of empathy allows him to tell the most difficult stories, including that of his own grandfather.

Folding himself into the chair positioned to face English teacher Sean Mullin, who questioned Bilger for the second half of his presentation, Bilger detailed his reasoning behind pursuing this difficult part of his lineage.

Senior Sarah Hedayatnia enjoyed this style of interviewing a speaker for Assembly. “It was a very natural flow of conversation, when Mr. Mullin was questioning him. I liked that sort of informal style.”

Bilger described the time it took for his mother to work up the courage to visit Alsace and learn more about her father. The story turned on its head when his mother stopped an older gentleman, who would have been around Gönner’s age if he were still alive, in the street. When she asked the man if there was a possibility he recognized Gönner’s name, he looked at her in absolute shock.

“Know him?” the man told Bilger’s mother. “He saved my life.”

“As it turned out,” Bilger glanced to the audience, holding the microphone in one hand and gesturing loosely with the other, “the man my mother stopped was a leader in the French Resistance in Alsace.”

Though Gönner was, as Bilger described, an “ideological Nazi,” when it came to actually sending people to the camps, “he realized he couldn’t do it,” Bilger said, shifting back slightly to address Mullin directly. Gönner began to aid the French Resistance against the Nazis, using Alsace as an oasis for French children in danger of persecution.

Bilger said that he traditionally saw two types of stories when it came to Nazi Germany. The traditional Nazi story, and the “Schindler types.”

“But what I have never seen is the transition from one story to the other,” he said.

“I think it’s an interesting narrative,” said senior Nicole Mangaroo. “To think we shouldn’t be humanizing members of the Nazi party does make sense … [but] I think it would be wrong to not see this side of the story.”

This brings up a poignant discussion considering whose stories are told, and whose stories are silenced. History is made from the stories of individuals, and writers like Bilger honestly and openly tell us the intricacies of these stories.

“His is the story of a person discovering the humanity of those he has been told have none and bucking his mission to save lives,” said Director of Diversity Josina Reaves. “We can’t exist on stories that only show the very best or very worst of humanity. We need complicated and true stories that show how people grow, learn, and change, especially when morality is on the line. When we don’t get stories like this, we don’t have models for our own deep dilemmas and ethical challenges, and we need those.”