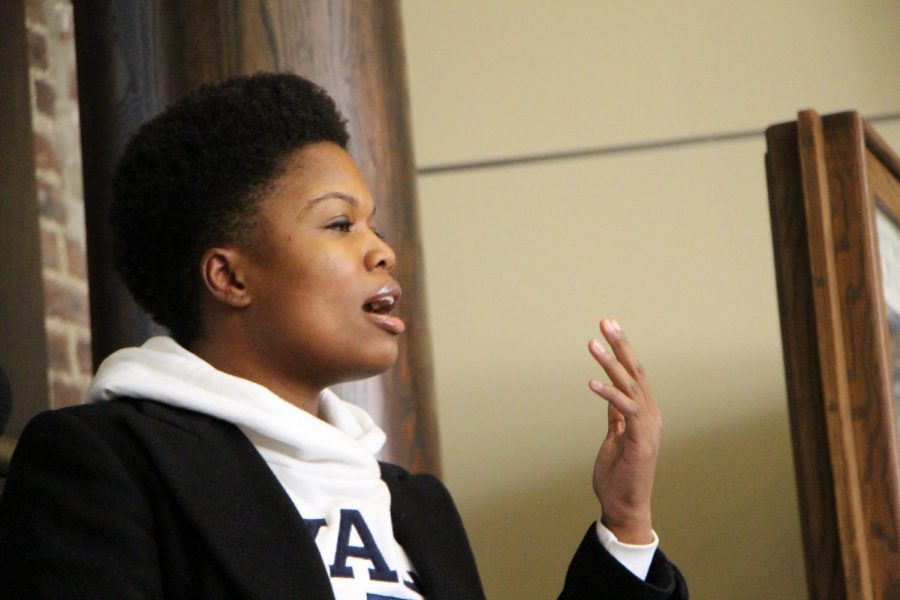 Raquel Thompson contributes to the conversation at the library forum on Wednesday, January 23.

The blackface video that circulated around Poly on January 18th, not only made a significant impact on Poly’s students and faculty, but also the surrounding community of parents and alumni. While the student body was quick to make their protest apparent in a walkout of over 300 students, alumni have also recently emerged to criticize the lack of transparency from the Poly administration and discussed the need for student activism.

Raquel Thompson ‘02 came to the campus on January 23rd for a forum held by Head of School Audrius Barzdukas to get a sense of what had really been done since the video became public. She said, “There has been complete silence from our alma mater to us and no direct communication about the matter. It feels a bit secretive, and therefore not so honest.”

Raquel found the lack of transparency from the administration concerning as she believes that alumni would be very useful in moving forward from the scandal.

She said, “Alumni can be their biggest resource in helping this because we have our personal experience, but we’re also lawyers, activists, and thinkers that can deploy our skills to solve this problem.”
Despite the lack of communication from the school to alumni, Thompson is very inspired by those who walked out.

“It is a very scary thing to hold anyone accountable, and so I can only imagine what it was like for those students to stand up in chapel. I got teary-eyed at the thought of their bravery because they didn’t know how many other students would do it with them,” she said.

Thompson was also surprised by the level of student advocacy as compared to her own experience at Poly. “I don’t recall any student activism. There were conversations in corners but definitely never a 300 person demonstration.”

A big step for the administration, she believes, was naming and directly addressing the problem.
“When no one names it, you think you’re going crazy. It makes you feel very alone. There’s a huge victory in just naming it,” she said.

Student outrage over the complacency surrounding racism has spread to other schools in New York City and sparked similar movements. The Stuyvesant Black Students League at Stuyvesant High School sent a letter to their administration mirroring the letter written by Umoja leaders Talisha Ward and Jeovanna Deshong-Connor. The letter identified instances of racism at their school, as well as a list of demands for the school in hopes of making a lasting change.

This, Thompson believes, is the beginning of Poly becoming a model for other schools. By making lasting changes that will help rid the school of racial intolerance, Poly can improve the experience of their students and serve as a model for others.

Thompson said, “If Poly really wants to change its DNA, it not only has to work within the institution but to deepen that. To do this, it should attempt to establish itself as a leader because that’s where true accountability happens.”