Girl’s Cross Country: The Most Dangerous Sport in High School 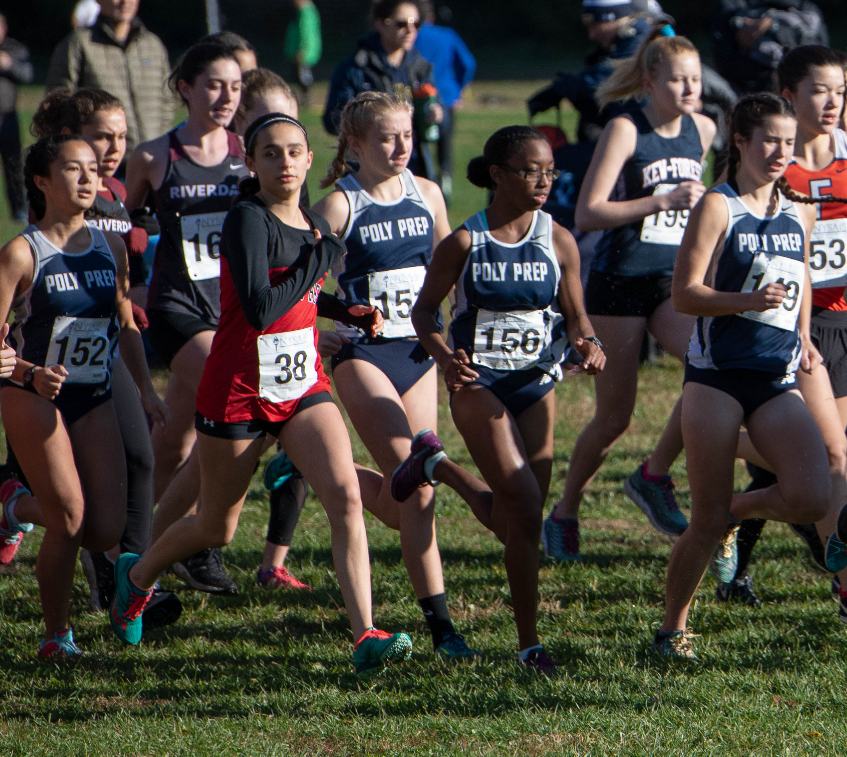 Members of the Cross-Country team burst out of the starting line.

When I ran my first competitive 5k in 2014, I told myself that I was going to quit cross country the second I finished. I was in eighth grade and had been running on the high school team for around two months in freshman races before I moved up to the varsity team for our league championship. I felt like I was dying of pain and didn’t know how I would ever get myself to run another race. But after I finished and did well, I smiled and forgot all about that moment until the next race.

Throughout my five years as a competitive runner, I have gotten used to feeling a lot of pain. I’ve run thousands of miles and have had more bad days than good, but the only pain that has really hurt my running trajectory didn’t come from a tough workout, early run, or race where I went out too hard: it came from injury.

In addition to the general aches and pains in my knees and legs on a nearly daily basis, I have had a stress fracture, two stress reactions, a strained calf, recurring shin splints, a muscle adhesion in my right quad, and complications with the growth plate in my left foot. To some, this list might sound like cross country might not be a suitable sport for me or that I have especially weak, injury prone legs; however, to almost all of the runners I have met, this story sounds all too familiar.

High school girls’ cross country has the highest injury rate out of any high school varsity sport, according to a study done by Dr. Stephen Rice, the director of the Athletic Health Care System. Most injuries in cross country are categorized as overuse injuries which occur from repeated mini-traumas to weaker body parts through repetitive activity, like running.

“Most injuries come from weakness,” my physical therapist Janet Nelson told me at my last visit to her office. “Running is such a repetitive form of exercise that any weakness or issue with form is felt over and over again in your legs so that imbalances in strength and mobility are really impactful and often lead to overuse injuries.”

None of my injuries or weaknesses are out of line with what one would commonly expect for a female runner in high school and from what my own physical therapist and other doctors have told me, a lot of these problems can be improved by increased mobility and strength training.

Injury can have major negative impacts on the mental health of runners. In my own experience, being injured has led to increased anxiety and frustration with cross country and other aspects of my life as well. Injuries feel like a betrayal, and the process of coming back to running slowly to try and avoid re-injury is tortuous.

While I believe strength training could improve injury rates, there has to be something else to account for girls’ cross country topping the list of injury rates for all high school sports. Male athletes have a natural advantage physically, but the strength disparity between male and female runners isn’t as large as one might think. The girls on my team often lift roughly the same weight and usually do more strength training than our male counterparts.

Dr. Anne Hoch, the director of women’s sports medicine at the University of Wisconsin, agrees. “While weaknesses are often the root of overuse injuries and lead to the high rate of injury among runners generally, the gender disparity in cross country is more likely to come from girls often having inadequate levels of calcium, vitamin D, iron, and low caloric intake, setting them up for bone fractures and other injuries,” she says.

Nutritional deficits are a common issue for female runners. According to Dr. Margot Putukian, the director of athletic medicine at Princeton University, the frequency of these nutritional issues can be attributed to a combination of a lack of education about proper nutrition and unusually high rates of eating disorders.

Girls’ cross country also has the highest rate of eating disorders according to a study conducted by the National Collegiate Athletic Association. Improper nutrition can easily lead to athletes falling into the female athlete triad: undereating, amenorrhea, and early onset osteoporosis. This triad frequently results in injuries which helps explain the exceptionally high injury rate in girls’ cross country.

Eating disorders are a prevalent, but hardly talked about, issue in competitive running. There is a natural association between fitness and thinness in the sport and, consequently, an association between thinness and speed for many young runners. It is easy for female athletes to look at the girls who are winning, runners who are much thinner than the average teenage girl, and come to the conclusion that losing weight is the key to dropping time.

Being fast, at any cost, is an overpowering force in the culture of competitive running. In February of my junior year, I finished a mile race in Staten Island in the slowest time I had run since I was a freshman. After missing 3 months of that year due to injury, I was out of shape and extremely dejected. I walked off the track, into a hallway, sat down in an isolated corner, and began to cry. I blamed myself for being slow, for not trying hard enough, for getting injured, and for being out of shape. I thought of all the things I was doing wrong, many of them beyond my control, and was so angry that I didn’t feel like I looked like the girls who were running the times I wanted to.

“The desire to control every minute detail of our training, from hours of sleep to each tactical second in a race, leads young women, who due to biology and puberty often inevitably follow a non linear path in terms of peaking in our training and fitness, to feel that the only thing we can decidedly control is caloric intake and the appearance of our bodies.” said Ella Ketchum, a Poly alum and All-American in the 2 mile who currently runs at Dartmouth College.

At 5 foot 3, thin, and muscular, any onlooker would think Ella looks exactly how runners are expected to. However, she told me that when she would toe the line at big competitions, she felt as though she didn’t match the body type of the elite runners surrounding her.

“Now I feel like I have a much better attitude surrounding food and body image than I did in high school… and it’s still hard for me not to compare myself to the other girls on my team or that I compete against,” she said. Ella has had three stress reactions which have led to her miss entire seasons.

Emma Abrahamson, a former runner at the University of Oregon’s cross country team which won NCAA nationals in 2017, has said publicly that for a while, she “didn’t feel like she looked the right way in the uniform,” and while she never developed an eating disorder, she said, “the anxiety about the way I looked on the track permeated so many aspects of my life.”

Every summer from the time I started running in 8th grade to before my junior year of high school, I attended a cross country camp called “The Running School”. One of the camp’s staple classes was an annual nutritional seminar taught by Jim Wharton, a well-known stretching guru. Instead of addressing the prevalence of eating disorders in female cross country runners, Jim would always talk about the evils of sugar, benefits of not eating red meat, and easy ways to replace meals or snacks with supplements. His favorite phrase was “Food for fuel, not for pleasure. You run how you eat.”

In years of hearing this talk, I had never been told about the dangers of undereating in running or the ways that nutritional deficits can quickly lead to serious injuries. Girls in my cabin would eat granola bars for what seemed like every meal, and counselors told me not to eat pasta or other simple carbs. When I was entering 10th grade, I heard Jim Wharton’s nutritional speech for the third time and told myself that the solution to all of my running problems was to completely stop eating processed sugar and limit the amount of red meat I ate. I hadn’t improved from my 8th grade times in the ways I wanted to I took “you run how you eat” to heart and told myself that I would get faster if I ate the way they were telling me to.

I largely cut out sugar and stopped eating red meat and went into my cross country season expecting nothing but success. Instead, I ended up anemic. I passed out twice that season because I wasn’t eating properly or enough. My knees were injured on and off the entire year. My shin splints were worse than ever. I was generally unhappy and got slower.

Luckily, I didn’t develop an eating disorder, but the way I was eating wasn’t healthy and I didn’t know enough about nutrition to connect my injuries to my nutritional deficiencies. After a year, I was injured and sidelined for my junior year cross country season. It took another serious injury and disappointing races for me to realize things needed to change before I started my senior year.

Cross Country is a sport that has given me so much purpose and happiness, but the current culture surrounding nutrition and injury isn’t healthy or sustainable. Not only are girls not learning about proper nutrition, but many are taught information that can be detrimental to their health and running careers. We don’t need to make it harder for girls by reinforcing ideas that the way to be fast is to lose weight, and perpetuating a cycle of injury can quickly stall a running career in addition to hurting young girls’ self-esteem and overall mental health.