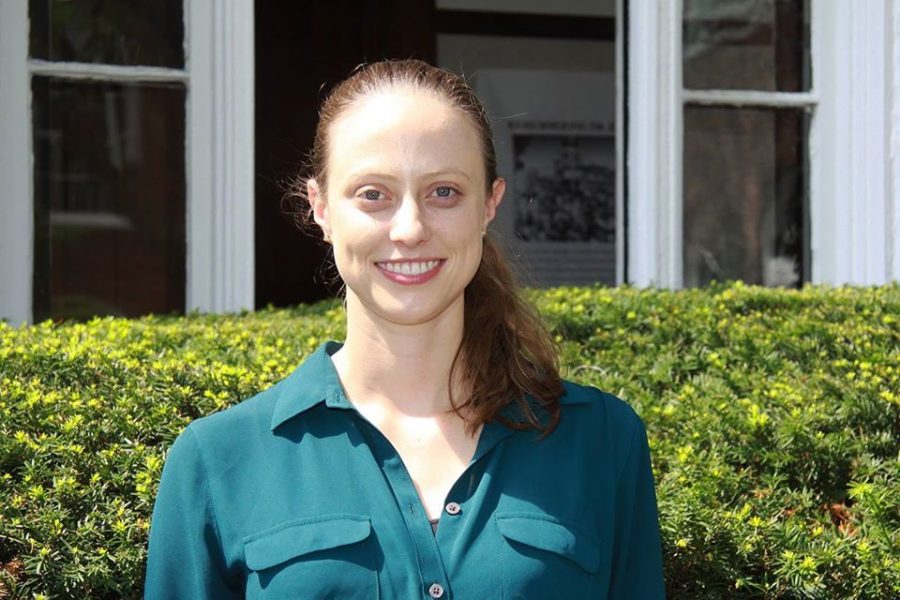 The Polygon welcomes Danielle Pietro to the Upper School History Department.
When people think of playing games in school, their minds usually go to recess. However, in History Teacher Danielle Pietro’s classes, students role-play and use board games as a vehicle for learning.

“I love Ms. Pietro’s class. Game-based learning makes learning easier for me because it’s more engaging. Rather than learning about spy tactics through a PowerPoint or something, playing a game allows us to see these tactics first hand,” said Senior Veronica Meyer, a student in Pietro’s Democracy’s Spies and Citizens class.

Pietro is a graduate of Brown University. She majored in the History of Education and received a master’s in teaching. Although her masters mostly focused on project-based learning, she was interested in games as a means of interactive learning. Two summers ago, she pursued this interest and applied for History Quest, a convention about game-based learning in history, where she was given the tools for the first time to change the way kids learn.

She said,  “People learn better by interacting rather than just passively receiving information.”

Last year, she brought her unique teaching approach to Poly.

One of Pietro’s most successful games has been her original board game about the US immigration system. By requiring the eighth graders to understand rather than just memorize the terms, this game gave the students a firm grasp on tough vocabulary. Furthermore, it fostered a sense of empathy in them for immigrants, especially when they would get frustrated with the game.

“Games ask kids to use content in a very real way,” she said, “they develop empathy, they become better problem solvers, they just remember better through it.”

Senior Tommy Bennett said, “To start off the year, our class was involved in a spy game to put us in the shoes of actual espionage agents. I really felt like it put me in the shoes of people in covert operations and taught me a lot in an interactive way.”

Pietro acknowledges that there are some limitations to her teaching approach.

She said, “There’s a line to be drawn with game-based teaching. You can’t gamify systems of oppression or direct personal experiences.

In her own early learning experience, the only moments Pietro really recalls are the ones in which game-based teaching or truly interactive, simulational methods were used. For example, she re-enacted the Constitutional Convention in the seventh grade. Also, she and a few classmates got to be journalists at President Obama’s inauguration. According to Pietro, she and her classmates were up until 3AM doing journalistic work, interviewing people, and just getting caught in the rush of it all.

She said, “The next week, I remember sitting in a geometry class just thinking, I cannot learn like this.”

Pietro’s mantra is “Content area is a vehicle for skill.” Her methodology allows students to develop a deeper understanding of the material while enjoying their learning process.

“It has enriched my learning and makes me look forward to class every day,” said Meyer.