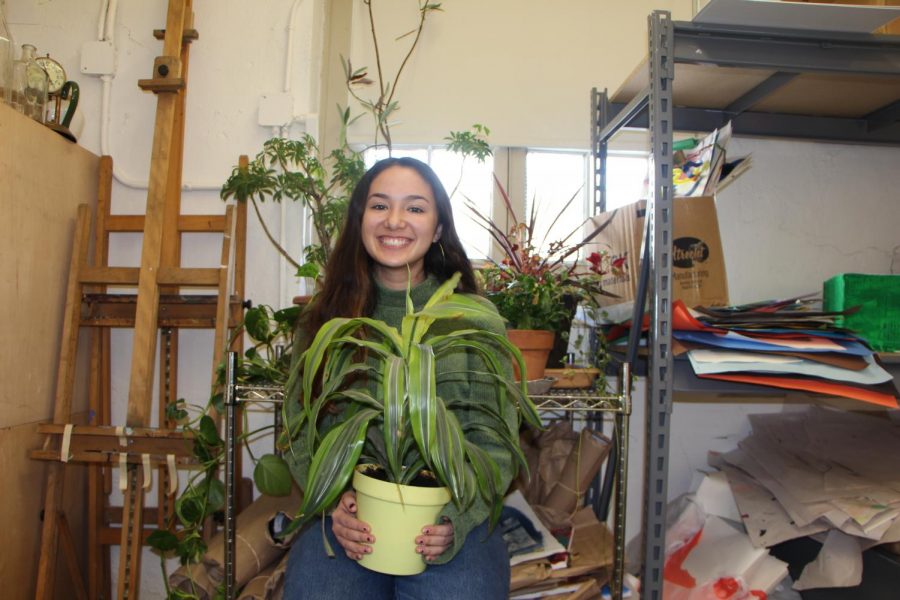 A portrait of Olivia Hurley holding a potted plant.

Senior Olivia Hurley spends her time doing everything she can to make Poly and the world a better place.

Hurley is also planning “Culture Night.” While Community Diversity Day is more serious and about current issues, Culture Night aims to be an evening of celebration through song, dance, and food.

Hurley aims to make a difference in each of her extracurricular activities. In Cambodia Club, she helps organize fundraisers such as the hot chocolate sales. She was also in cross country and track but is often set back by sprains and arthritis, so she has appointed herself the team cheerleader. As a member of the Student Service Board, she organizes all forms of fundraisers.

Hurley not only strengthens existing activities but also seeks out what is missing in the community and what she can do to fill that void.

After realizing the lack of action done by Poly to raise awareness of climate change, she organized Poly’s participation in the New York City Climate Strike. She said, “Guys, climate change is real. In 11 years, it’s going to really suck.”

In hopes to bridge sustainability and the arts, she is organizing a sustainable fashion show during which emphasizes “trashion,” the art of repurposing garbage. Hurley was inspired after learning that the clothing industry was the second-largest consumer of the world’s water supply and pollutes the ocean with microplastics and seeing it at other schools.

She said, “Sustainability should at the forefront of everyone’s mind because it’s something that affects everyone regardless of race, regardless of political background, regardless of religion. If we don’t do anything by 2030, it’s done. There’s no point anymore.”

Last year during Women’s History Month, Hurley was in charge of leading the freshmen in an engaging conversation about women in Poly. During the discussion, she posed statements for the students to react to, such as “All boys are inherently sexist” and “There should not be free tampons and pads in the bathroom.” The boys in the group expressed that they felt discriminated against by the activity and argued that because the students are girls, they can get away with certain activities the boys would not. Olivia said that the boys’ response was “so wrong” and “so crazy.” There was a follow-up conversation with only girls, from which Hurley was inspired to create a women’s affinity group.

She said, “Every other school has a women’s affinity group, so why don’t we? In Poly, since women did come second to men, we’re still easing our way into the school. We’re definitely here, but there’s still something to do about it.” Thus, the women’s affinity group and Big Sisters group came to be.

Over the summer of her sophomore year, Hurley had an internship at Council on Adoptable Children, an organization that helps with the post-adoption process.

She said, “Listening to all these kids’ stories was so sad. Kids are so funny. They tell you their whole life story…All these kids had gone through so much, and you could see how strong they are.” From this experience, she was inspired to start a toy drive at Poly.

Hurley joined the Special Olympics Club her freshman year and helped lead it as a sophomore with current senior Veronica Meyer. The club participates in the Polar Plunge, an event where kids and adults run into cold water to raise money for athletes to participate in the Special Olympics, the Olympics for those with intellectual and physical disabilities.

Hurley said, “The highest adrenaline you can feel in your life is the moment before you jump into the water.” During her sophomore year, there were 13 participants, and within three days, Hurley raised $1,000 out of the approximate total of $2,000. What’s her secret?

Hurley said, “For the lack of better words, ‘harassing’ people and being so persistent works.” Last year, there were 36 participants and they raised over $16,000. It’s becoming more of an event that people can look forward to, and Hurley and Meyer have formed close bonds with the people who arrange the event. Poly even got to attend the winners’ breakfast even though they didn’t win.

When asked what made her interested in community service, Hurley said, “I have no idea. I don’t do any of these things for college. My dad gets so mad at me because I get so worked up and stressed and it definitely takes me away from my schoolwork because I care about this more which is fine.”

Hurley’s motto is, “If everything I do for the rest of my life doesn’t have something to do with trying to make something better, even if it’s so small in the community or makes one person’s day better, then there’s no point.”

If we all take Hurley’s motto to heart, perhaps the world will become a better place.

A lot of Hurley’s art revolves around the community. In her AP Art Studio class, she had the assignment to pick a topic of her choice and delve into it. Over the summer, she worked in an ice cream shop in Staten Island and was exposed to the opioid addiction prevalent in the borough.

She said, “Art is a nice way to make other people, regardless of intellectual and language barriers, understand. It’s complex, but it’s also a feeling a lot of people share. It’s [also] a nice way to get out my frustration.”