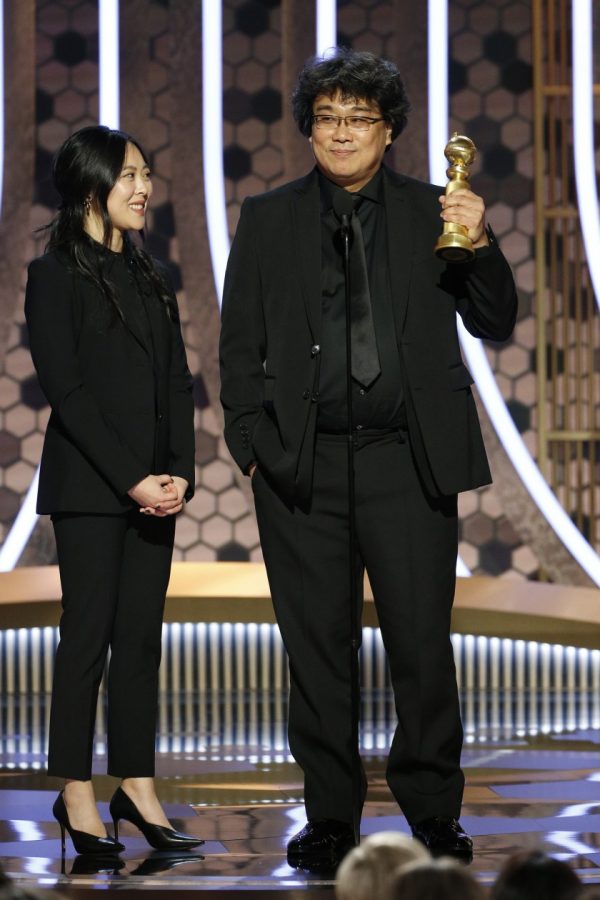 “Parasite” director Bong Joon Ho, with an interpreter, at the 2020 Golden Globe Awards.

For the first time in a couple of months, I turned on my television at home. I almost never use cable anymore, since streaming services like Netflix and Hulu have proven to be superior in the modern world. However, on January 5th, there was something too compelling that I couldn’t imagine missing.

For too long, the representation of Asians in film and media in America has been compromised due to limited portrayals and storylines in Hollywood. For an industry that has claimed to have developed tremendously since its origins, Hollywood movies continue to overlook minorities.

Some may argue that there are films that cover storylines involving Asians, which, to an extent, is true. Yet, Scarlett Johansson portrayed the main character, Motoko Kusanagi, in the adaptation of the landmark Japanese anime film Ghost in the Shell. Wearing a pair of contacts and a black wig was enough to replace the Japanese Americans who could’ve been the lead instead. Yet, Tilda Swinton played a character in Doctor Strange who was of Tibetan origin in the original comics. She was accused of yellowface, a concept that dates back to the beginning of the twentieth century when American cinema began. Yet, Emma Stone is supposed to be a character of Chinese-Hawaiian-Swedish descent in the film Aloha. Rather than giving the roles of these storylines to Asian-Americans, they’re being offered to white actors and actresses, allowing the suppression of Asian-American representation to persist.

Many roles that Asian Americans have been given perpetuate and maintain their derogatory stereotypes. From Long Duk Dong’s exaggerated, broken English in 16 Candles to Lilly Okanakamura’s painful portrayal as a girl harboring extreme silent tendencies in Pitch Perfect 2, Asian American actors and actresses are still dispossessed of the potential to influence the trajectory of film.

Raised on a mediocre diet of American television and Hollywood movies, it was difficult to find Asian American actors and actresses that made an impression on me. I can count on one hand those of Asian descent who inspired me during my youth: Sandra Oh, Lucy Liu, and Margaret Cho.

However, in recent years, the number of films with Asian cast members has witnessed a major spike. Movies in which a majority of the cast are Asian are becoming commonplace, such as Crazy Rich Asians and critically acclaimed film The Farewell. With these accomplishments also followed the chance for Asian Americans to be embodied in motion pictures and in other creative mediums alike.

Asian films beyond the scope of American cinema are gaining momentum globally as well. Parasite, a Korean film whose popularity has recently infiltrated American culture, attests to the importance of increasing diversity in cinema. Too many adventures, comedies, dramas, tragedies, thrillers, and other stories go unnoticed, and these are captivating storylines that people want to watch. Bong Joon Ho, director of Parasite, encapsulates this idea effectively: “Once you overcome the one-inch tall barrier of subtitles, you will be introduced to so many more amazing films.”

Asian representation is only beginning to progress beyond the footnotes of Hollywood blockbusters. The attitude towards actors of Asian descent is rapidly changing, and hopefully, it transforms into a sense of normalcy within the film industry. Staring back at me was no longer a white canvas but rather a vivid landscape that promised a revised and inclusive future for cinema.