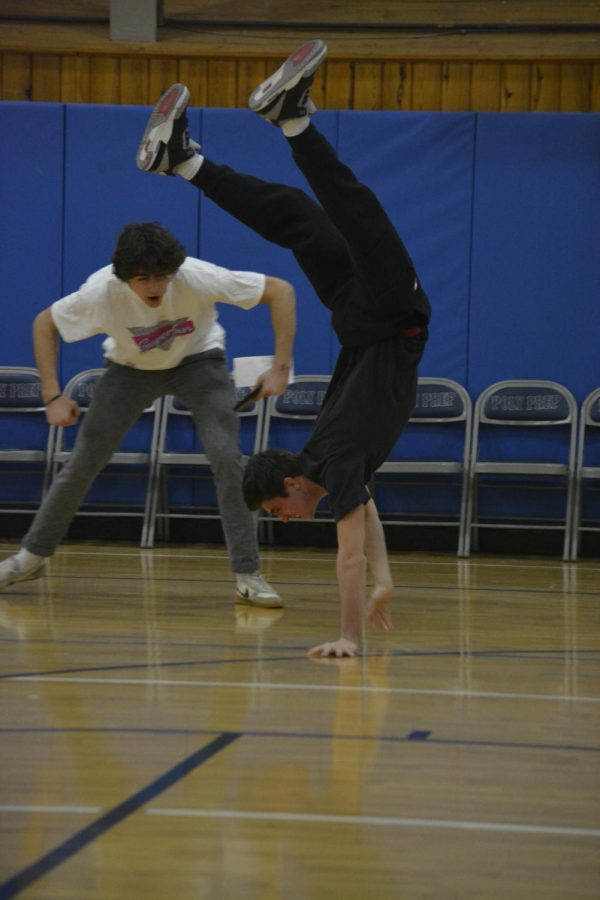 Senior Dove Bonjean-Alpart walks into the pep rally on his hands.

In my four years at Poly, I have been to my fair share of pep rallies. As an underclassman, I remember eagerly waiting outside the gym doors, ready to cheer on my friends and classmates before some of their biggest games of the season.

At some point, though, the excitement turned into the dread of having to wait an extra fifteen minutes for the bus and the stress of sitting in a crowd of hundreds of restless, uncontrolled teenagers.

Something had changed. I no longer wanted to see the teams rush out to our cheers, nor was I content to watch them stand idly for 30 seconds to a muffled pop song before running off with a wave.

Back in October before the first pep rally of the year, I was in the Makerspace with fellow seniors Madison Malerba and Rochelle Falikman, two members of the Poly Girls’ Tennis team. They were rehearsing their pep rally dance routine to YNW Melly’s hit song “223’s.” I remember the joy on their faces as they moved, slightly off-tempo, to the beat.

Soon after, however, they were told that the teams would not be permitted to perform at the rally.  “We were really excited. Then, we were told that we couldn’t perform,” said Falikman. “It made us sad because we practiced the dance at our games, on the bus, in the halls. We were ready to go.”

Spirit Captain Chase Behar said that the ban on performances was lifted for the recent Oasis Night, but there was still a lack of dancing. Instead of dancing, we watched the underclassmen lead the pack before senior Spirit Captains Behar and Henry Ingrassia called for the seniors and captains.

Some of these features were successful, even bordering on entertaining. The wrestling team carried out their upperclassmen members, and senior Dove Bonjean-Alpart entered in a walking handstand. Junior Travis Chu graced the crowd with a split, and on the way out, junior Henry Morris did a flip, much to the approval of the audience.

Some other arrivals were messy and uncoordinated. This began with the very first arrivals from the swim team. The boys’ team was in the bathroom at the time of their entrance, leaving senior Nick Perez to run out on his own. Originally, they were told that swimming would be last in the lineup, but a last-minute switch caused the mix-up.

Senior Chris Hadley also credits the lack of enthusiasm to the acceptance of progressively worse pep rallies. “It has become a vicious cycle,” he said. “Teams do not find the pep rallies to be a source of spirit, thus they do not put spirit into them. The crowds do not see the teams putting in the spirit, so they do not give the spirit back.”

The strict new rules combined with a deficiency of organization have led to a structurally lacking event. Poly needs to consider reworking the pep rally format to raise spirit levels amongst the community. There are plenty of opportunities to amend the spirit events, and I’m just sad that when I graduate, I won’t be here to see it.