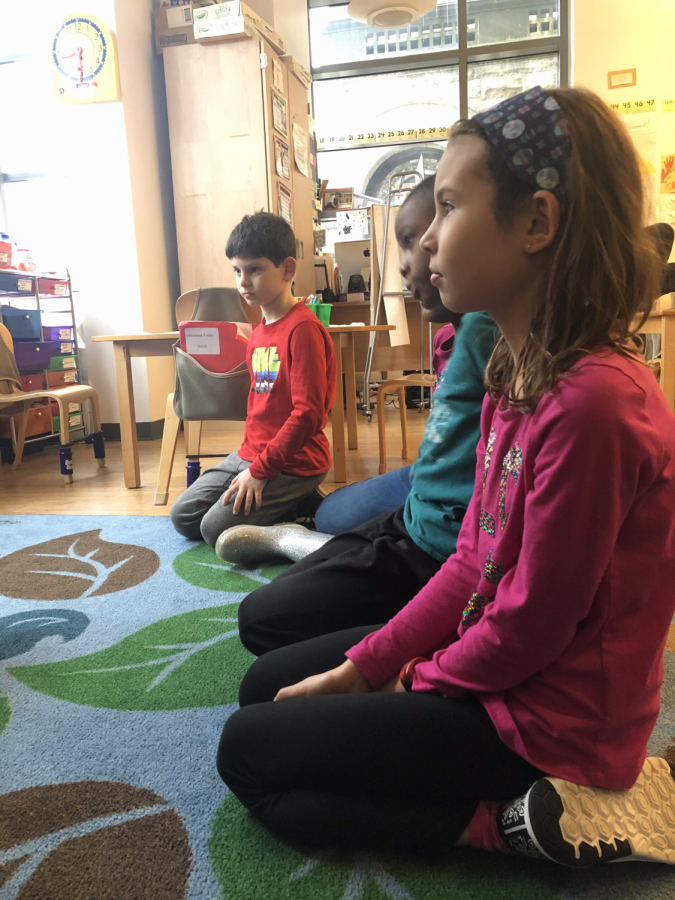 We took a trip to Poly’s Park Slope Campus to speak with the third and fourth graders who are part of the News Devil, the Lower School’s newspaper.

We discussed why they decided to join the club, which meets after school on Thursdays at 3:30.

Third-grader Brie Edwards said, “I wanted to inform the lower school about some big topics and subjects and things that are going on in the school.”

Third-grader Caiden Silverstein said, “I like writing things, making up my articles, and doing things for other people to see. I just like the idea of having a newspaper and I really wanted to be part of it.”

Unlike the Polygon, where each editor has a specific job, the staff of the News Devil works together.

“We don’t really have jobs, but we have assignments. We have assembly assignments and interview assignments,” said Fourth-grader Isabella Ly Bui.

Not only do the students work together editing and writing during the club, but they also find ways to continue collaborating afterward.

Third-grader Lilian Ziff said, “Me, Camilla, and Caiden and Liv, we work together on a lot of stuff, and so we find a time after school that we’re all free and we can all write each other and work on some articles and so that’s what we do”

Third-grader Camila Lyubarov said, “Some of us have computers at home so we can get into our Google Docs and work on it. Sometimes we are active with each other if we go on at the same time.”

We asked the students about what types of issues they cover in the newspaper.

Third-grader Julian Richards said, “We interview people and we write down what they want to say. We also write stuff and put it in the newspaper so other people can see what we wrote.”

Lyubarov said, “We’re always assigned assemblies… and then we also get to do our own articles, like what we want to write about.”

Poly Prep’s Lower School has assemblies two or three times a month. The staff interviewed Raul the Third, an illustrator and the author of several graphic novels, in November.

Ziff said, “We just did an interview with Ms. Hunter, our tech teacher, and we are writing about the tech program.”

In addition to assignments of interviews and assemblies, they also have what Lower School Librarian and advisor to the News Devil call “menu of fun items.” These include trivia, sports articles, book reviews, puzzles, games, and jokes.

In the last issue, they featured the poll: “If you were in a never-ending desert and could only have food or water, which one of these would you choose?”

Silverstein said, “I typed up the question and we left it in the Library for a week, and every class has Library per week, came by and voted by inserting colored slips of paper in a box. After that, I came to the Library and counted how many of each and now we have the results and put them in the newspaper.”

The News Devil is also featuring the cooking staff.

Ziff said, “It’s not like they are really big in the school and not a lot of people know them so we thought it would be really cool if we put them in the newspaper and people could really notice them and appreciate what they do for the school.”

We told lower school students about our layout process and asked about theirs.

Ziff said, “Last semester we decided what we wanted to be on the front page. In the back, we had all the jokes and riddles and word searches and puzzles and then in the middle, we had a lot of the articles. We didn’t really have that much sports last semester, so I think we might have a sports section because a lot of people are doing sports now.”

Third-grader Liv said, “There was this one class, or meeting I guess, where we all sat down on the rug and [the teachers] would have this big piece of paper and we would all decide where we should put things.”

Because this is the first year of the News Devil, they have experienced some delay in getting their first issue out. The articles are finished, but due to layout problems, it has not been published yet. However, they have big plans for when it finally is.

Lyubarov said, “We’re gonna hand it out to everyone at school and I’m not sure that the really little kids can read but I’m pretty sure their parents will be able to read it.”

We asked the students what they think that the hardest part about putting out a newspaper is.

Silverstein said,  “Knowing that you have a timeline and having to get the newspaper out every eight weeks. Now we have like two or three weeks left and we have a bunch of articles that aren’t finished. So knowing you’re going to have to rush rush rush can get a bit scary.”

Bui said, “After you interview, it’s harder to fit all that into an actual paragraph.”

The students also discussed their favorite part of working on the newspaper.

Third-grader Leo Cohen said, “The best part is seeing what people worked on and how hard they put the work in and getting to read what they wrote.”

Edwards said, “By working together with friends and writing down your article, it can help you learn more about the teachers and your friend, like what kind of topics they like.”

Inspired by their counterparts at The Polygon, many of the lower schoolers are eager to continue working on a newspaper in middle school and high school.

Silverstein said, “I would enjoy writing for a bigger community because there are only about four grades in the lower school that read this, so I would like to write for some more people.”

Ziff said,  “It would be really fun to do it in the upper school… there’s definitely probably a lot more news so it would be fun to write a lot more articles.”

They asked us some questions about our process and looked at our issues from this year. They were shocked that we published every month and curious about how we recruit people.

We discussed the difficulty of writing about more controversial topics at Poly, especially when it relates to the faculty.

They told us about some problems they face at school and we talked about bringing relevant school issues to the paper.

Edwards said, “The teachers were cutting the kids in line. So people started writing letters to our principal, Dr. Yasharian because they wanted to change it.”

They wanted to write an article about the teachers cutting the lunch line but didn’t know how to accomplish this. We taught them how to call out problems while still being respectful.

Bui asked, “Do you have any pushback from the people who read it being like, ‘I don’t agree with this?’”

We told them about the opportunity for students to write letters to the editor when they disagree. We discussed the challenge of covering critical issues without going too far and recommended that they rely on quotes and facts instead of putting in their own opinion.

Silverstein said, “I enjoy looking at the end product and just knowing, you and other people all collaborated to make one big newspaper. Looking at how you made part of it to make one big paper.”