The Polygon: The Student Newspaper of Poly Prep Country Day School • May 11, 2022 • https://polygonnews.org/3111/middle-school/ms-lockers-no-more/ 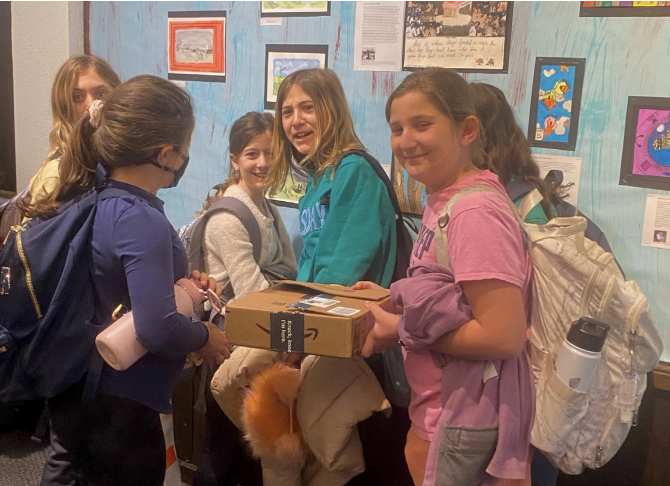 Seeing middle-schoolers walking down the hallway carrying books, jackets, and various other supplies is a common sight at Poly this year. Middle school students have not had lockers this year, which means all supplies and materials must be carried either in bags or in hands, and a lot of middle-schoolers are very unhappy about this.

“This year the lockers were not available because we started the year on COVID protocol,” wrote Middle School dean Peter Soto in an email to the Polygon. “Having a larger amount of kids in the locker room at close proximity was seen as a larger risk than we wanted to take.”

The burden of middle school is large enough, but this year middle-schoolers also have to bear the weight of their over-packed book bags. Sasha Londoner ’27 said, “most days I’ll come home sore and tired [from carrying my large book bag].” Londoner also mentioned, “many students, myself included, will often have [their] bookbags weigh well over 15 pounds, and [there are] days where we have all academic classes only increase the intensity of this situation.”

“I never want students to feel like there is too much in their backpacks,” Soto wrote. “That is why I have been giving kids the option to leave things in my office.” Soto noted that there are cubbies in the quad tent for the 5th and 6th graders.

In addition to physical distress, the lack of lockers has also taken a toll on middle-schoolers mentally. Londoner said, “not having lockers this year has not only affected my physical well-being but it’s also affected my mindset…it’s also put me in a stressed and often frazzled state…I have a tremendous amount of digital and physical items I have to remember, so having a locker could resolve many of these issues and better the student body in multiple fields.”

In addition to being a form of storage, lockers were a fundamental part of the day-to-day middle school experience. From decorating your locker to your seeing friends in the locker room, having lockers was an exciting aspect of being a middle schooler. Londoner shared, “I really enjoyed…how they improved students’ management skills, but they also brought the community together. When lockers were available, I remember how students would often come together to decorate a friend’s locker on their birthday. Seeing everyone celebrate and collaborate to make others feel happy was really uplifting, and something I definitely [miss].”

Students have also been wondering why Poly has been waiting so long to reopen locker rooms. It is quite clear that COVID restrictions at Poly have lightened up tremendously. Masks are now optional, most spaces are at full capacity, and Upper Schoolers already have their locker rooms. Londoner remarked, “I believe Poly is more than ready to reopen locker rooms for all of campus… [because] everyone deserves a space where they can store their belongings, and even if lockers are out of the question, students should at least receive cubbies similar to the ones the fifth graders have.”

Poly seems to be taking their time with the reopening of locker rooms with good intent, but the needs and concerns of middle-schoolers need to be accounted for in this process. Middle school dean Alia Carponter-Walker, explained “as the whole campus is undergoing renovations and construction this summer, it is too soon to say whether or not the implementation of lockers will be something that Middle Schoolers can look forward to during the 2022-2023 school year.”