The Polygon: The Student Newspaper of Poly Prep Country Day School • May 31, 2022 • https://polygonnews.org/3152/opinions/dear-poly/ 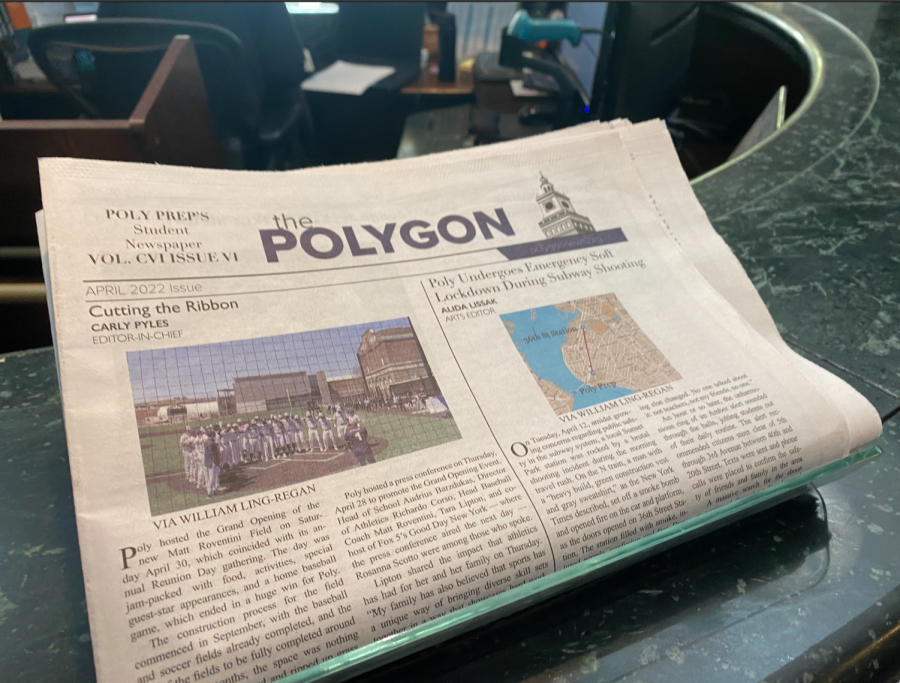 Over the past year as Editor-in-Chief of the Polygon, with help from my co-Editor-in-Chief Carly Pyles, our wonderful faculty advisor Rachael Allen, the staff, and all the people I’ve interacted with, I’ve learned quite a bit. I’ve learned how to tacitly ask probing questions; how to subtly craft a story; and how to navigate the politics of leading a free press through the rules of a school administration. Of course, I’ve also discovered that the writer’s high that comes with pumping out an article is unmatched.

After a modest 10 years at Poly, and as a writer for the Polygon for four, I feel that Poly Prep, despite some improvements, has remained the non-transparent, reactive institution it has been for decades. At the beginning of this year, knowing a bit about how this posture has resulted in some of Poly’s most troubling, public, and difficult moments, my goal as Editor-in-Chief was to help push this institution onto a more open, honest, and forthcoming path. I knew both the school, its students, and its alumni (of which I am about to become) would benefit from more openness and clarity.

I crave knowledge and answers. While the school was pretty communicative in the early days of COVID-19, in many other areas, I, the Polygon, and you, dear readers, were met with initial silence, sometimes obfuscation, and occasionally a straightforward response. Does Poly recycle following a COVID delay? What is taking the backfield renovation so long? What happened when Poly tried to change its mask policy? What happened to the faculty and staff members that left the school? (Check out polygonnews.org for some answers). This year, the Polygon did not shy away from controversy. Instead, we took it head-on, always sure to challenge authority. We often pushed the boundaries, yielding non-stop back and forth between the Polygon and the administration. I saw first-hand how complicated the value of transparency is to figure out.

In many ways, a school or business cannot reveal everything. The question remains as to what extent a school’s administration should be transparent with its community. At a private school, not stringently supervised by the government, the school may choose to tell us as much or as little as it wants. It may also choose to say less simply for confidentiality purposes. Even further, just like any school, Poly has to grapple with what is appropriate to tell students aged 10 to 18.

​​In its history, Poly has been known to push things under the rug. Even when an issue comes to light, today, Poly often responds without addressing the actual problem, seemingly hoping that it will go away before all facts are disclosed. For example, Poly did not confront the content of a racially-offensive, student-made video that circulated online in 2019 until students demanded they do so with a letter and school-wide sit-in. In a statement posted on Facebook, Poly wrote, “We took immediate action as soon as we learned of a highly offensive video, taken years ago, being circulated on our campus. It was an egregious violation of our community values and code of conduct.” The statement did not specify what action had been taken, if any.

In a letter in response to this statement, republished by the Polygon, leaders of Umoja wrote to administrators at the time: “While we acknowledge that the current administration has made efforts to address the video, they have not done enough; their repeated lack of action has contributed to an unsafe learning environment.” Additionally, they requested, “​​For an email sent out to parents, students, and alumni clearly addressing the content of the video (specifying that it was blackface).” After this letter, the aforementioned sit-in, and city-wide media coverage, Head of School Audrius Barzdukas sent an email to the community, writing, “Our Chapel was silent as [The leaders of Umoja] described a recently posted ‘video in which white female students were seen making monkey gestures and noises while wearing blackface.’” The email put the description of the video that Umoja demanded in quotation marks, which, in my opinion, took away from the email’s sincerity to address and confront what occurred.

As in cases like this, Poly often gives vague responses to crises, and the community is left with more questions that are inevitably filled with rumor and innuendo. Maybe it’s just the curious journalist in me, but I believe clearly communicated answers are always better than amorphous gossip, for everyone.

Barzdukas pledged loyalty to transparency in his first speech to faculty at the very start of his tenure, yet Poly disappointed a number of times. The most telling, in my opinion, was “mask-gate.”

A month after Poly adopted a policy that sent students home if they did not properly mask-up, former Director of Health and Well-being Sarah Zuercher emailed to employees, writing, “we will quietly end our practice of sending students home if they are not masked properly. Please do not announce this to students.” The Polygon got a tip with a copy of this email. That day, I sat down with Zuercher, pressing on if there were any changes to the protocol. To no avail, I read the email aloud. “Who leaked the email?!” Zuercher exclaimed with a grunt of frustration.

Poly told faculty not to tell anyone about the change in protocol. Poly was not planning to tell students that they would no longer be sent home for mask violations. Head of Upper School Sarah Bates explained to the Polygon, “Zuercher, as is protocol, usually releases information to faculty [first]…What we don’t want is kids to be like, ‘OK great,’ and wander around without their masks on. Because faculty are experts in their fields and not necessarily in coronavirus or public health, we want that to come from the appropriate person here on campus, [Ms. Zuercher].” Nonetheless, only after The Polygon spoke with Zuercher, she sent an update email to students. Students deserve to know what the possible repercussions of their actions are, or Poly cannot claim to be fairly holding students accountable.

I do appreciate that, less than two weeks later, Zuercher reached out to ask ifThe Polygon would write a story about some information she would be announcing to the school soon: Poly was going mask-optional. My article was published online that evening, coinciding with an email from the administration to the community. Kudos to Zuercher and Poly for being more open when they realized The Polygon could release sensitive information at any moment, like a fully functioning newspaper. School newspapers are real-world publications but live in a trickier space. Not only is The Polygon funded by the school it works to keep in check, but administrators hold powerful leverage over student journalists and faculty advisors, both of whom have lives at the school separate and apart from the newspaper.

Potential legal implications are always an obstacle, too. The Polygon confronted several personnel matters this year, dealing with the departure of several long-term faculty members such as Football Coach Kevin Fountaine and Middle School Drama Teacher Jill Bolstridge. Poly did not share the concrete details of the reasoning, but their sudden departures would not go without speculation within the community. At a school like Poly, as with many other institutions, the matter of employees and their occupation status is duly withheld. That does not mean, however, that any student, faculty, or even the school newspaper cannot ask questions. I reached out to both Fountaine and Bolstridge when reporting on their departures, who both shared that they could not speak in further detail on the record. If people must remain silent, so be it, but the people have a right to ask questions.

Poly is ill-served by hiding the full truth from the community as it just creates later rumors, and further harms our already tainted historical reputation. But Poly doesn’t have to be this way. Information should be extended far beyond the corridors of the front Oval hallway. As Zuercher discovered, The Polygon can be used as a communication resource if it is used to publicize new information and details, and clear up rumors.

But it should not be that The Polygon has to push the school to make things known. Polygon aside, Poly could reinstate more consistent meetings that include all the people who work at Poly –– administrators, teachers, coaches, and all to let them into the decision-making process, to know what’s going on behind-the-scenes, to ask questions, and to offer feedback. There was once a faculty-appointed Dean of Faculty to advocate on the faculty’s behalf. That ended when Barzdukas came to Poly. Maybe reinstating something like that would be worthwhile. For students, they shouldn’t have to ask questions, and they shouldn’t be secondhand to what the administration offers to faculty and staff first.

I addressed this letter to Poly Prep. Poly Prep isn’t just the board, Head of School, and other supervisors; Poly Prep is a school of students, teachers, administrators, coaches, and staff. While I’ve come to realize how complicated running a school can be, I still uphold that Poly Prep deserves a little more transparency. Don’t you think?

It’s been quite a year, Poly Prep. I hope you enjoyed.