The Real Returns of Re:Dish 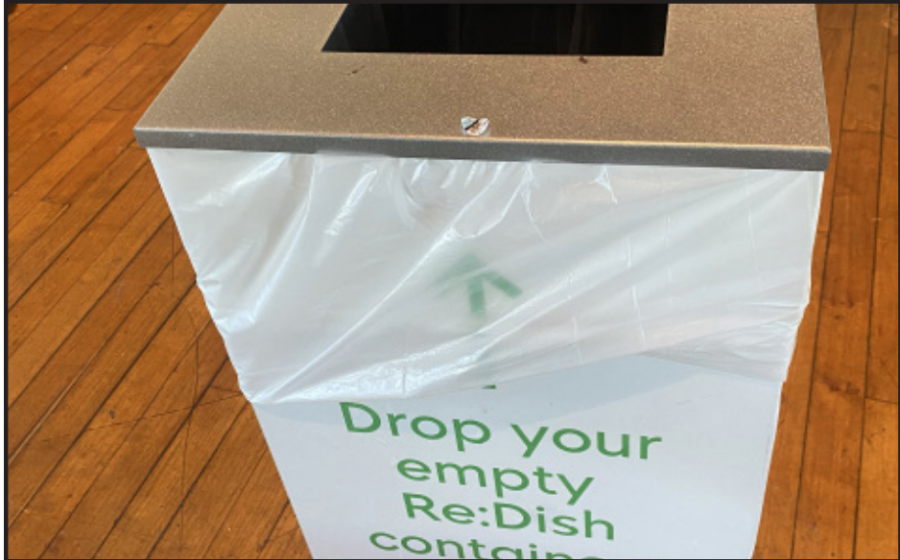 Poly implemented the Re:Dish program: reusable containers in which Commons’ sandwiches and salads are packaged in an effort to reduce waste and promote sustainability. In just its first few months, Re:Dish has raised questions about its financial feasibility in the long-term, despite its initial success sustainably.

Poly aims to improve our community’s environmental impact through this program. After only 10 washes and 500 individual container uses, greenhouse gas emissions are reduced by 93.2 percent and water consumption by 71.7 percent, which drastically reduces our carbon footprint, explained Louis “Chef Lou” Rossini, Poly’s chef manager, in an email sent out schoolwide.

Disposal bins are located throughout the Poly campus: in Commons, the tents, as well as the student center, making them easily accessible. After dropping containers off in the bins, they are taken to the Re:Dish cleaning facility where they are thoroughly sanitized and returned to campus to be used again the next day.

The seniors of the students for environmental justice club, Xavier Stolt and Jack Lille-Yerington as well as, Rossini and his team implemented the program.

“We were having supply chain issues and environmental impact issues with our disposable containers. At the same time, Re:Dish was a start-up Brooklyn-based company looking to partner with local schools and businesses,” said Rossini.

“The main motive behind the program is to convert Poly’s food services, which often used one-time disposable plastic containers, into a more sustainable system with reusable ones,” added Lille-Yerington.

Director of Service Learning Elijah Sivin, said, “I don’t want to say that Poly has never tried to do the right thing sustainably. I think it is hard to stay focused on it and institutionally, I don’t think we have done a good job staying on that track — we have been inconsistent. But it is interesting to me that when we gave students a really focused and specific message, in a more accessible way, students mostly did it right. And that makes me optimistic about the possibility of improving our community sustainably and even in other ways as well.”

Although Re:Dish might be appealing because it gives the community a sense of fulfillment in helping the environment, the financial implications of running the program must also be considered.

“We are facing real issues with the rate of return on the containers. The cost for each container is a little higher, we do think it’s worth it. But we need EVERY container to be returned to avoid much higher costs which might make us discontinue the program,” wrote Rossini in an email to the Polygon.

“We have seen around 88 percent of containers returned, but in terms of sustainability, this is just a short-term win. In the month of April we lost 9.8 percent of the Re:Dish containers, which has resulted in a loss of around $2,400. In the long run, if the school is losing this kind of money this program would not be ’sustainable’ for the school. I think what we need to consider in the long run is if we terminate this program, is that a loss environmentally? But if we keep the program intact is that a local loss economically?” added Sivin.

For now, for the most part, students have tried to do their part. Director of Student Life Jared Winston has been enthusiastically encouraging this program since its arrival.

“The program’s success thus far has reduced water waste and plastic waste on campus, which has a direct impact on our sustainability footprint. When we think about the kind of community we hope to be and the kind of world we hope to create, it is important that we think globally and act locally at Poly,” said Winston.

“Whenever I look in those Re:Dish containers in student areas I do notice they are being used fairly well. I see about 85 percent of the correct usage of the bins, and that is out of around 1,000 students and 300 faculty members on campus,” said Sivin.

“It’s super easy to follow. I also feel like I am helping our community by utilizing it,” stated sophomore Kaia Scott.

Winston added, “Re:Dish helps our students to think creatively about how we can move into a more sustainable future. The program is innovative and addresses a real need on campus and in this world, and it demonstrates a level of procedural intention that is needed to create lasting change.”

“Sustainability, unfortunately, isn’t so simple — if it were, our planet would be on a different trajectory,” Winston continued. “Innovating systems and solutions to the various problems facing us and our environment means thinking outside the box and trying new things to see if we can make a difference — Re:Dish is a prime example of just that.”