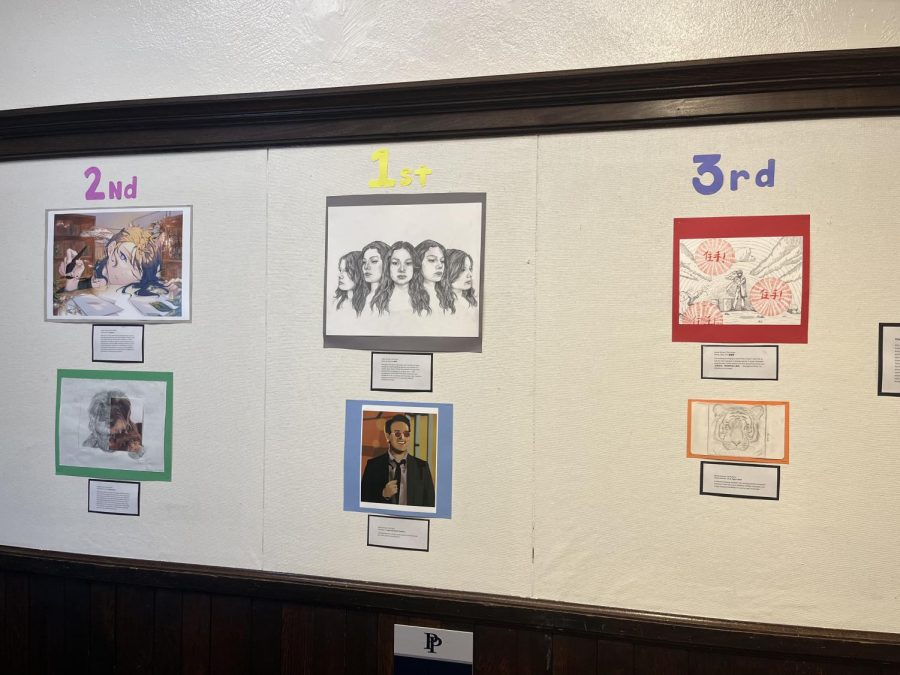 This past April, Poly hosted its first visual arts competition, a concept, as Director of Student Life Jared Winston put it, “created by students, for students.” Competition founder senior Tasha Fonstein has been involved in Poly’s arts programs throughout her time at Poly. “What inspired me to create this competition was the lack of arts awards for non-seniors,” Fonstein explained. “I wanted Poly’s art department to get more attention.” Fonstein designed the competition to be a place where middle schoolers and underclassmen could be recognized for their artistic abilities by winning awards.

More than 40 Poly students participated in this year’s competition, with submissions ranging from illustrations, fashion designs, ceramics, and even photography and videography. There were six winners in total, three for the Blue team and three for the Gray team. (The Polygon interviewed the Middle School winners; for more information on the Upper School winners, please see the photo gallery below.) First place was awarded to the Gray team’s member, City Smith ’27, who shared that he hadn’t expected much from the competition and “was scared I wouldn’t win anything or get acknowledged.” City also says that he forgot he had entered the competition in the first place, and later missed when the winning results had come out.

Second place Gray-team winner Lila Suter-Chung ’28 had been hoping that an art competition would happen at Poly.” She said, “I really wanted to show off my skills and really just wanted to try my best.” Lila spent about three to four days on her artwork and said she was extremely nervous about the competition. Another winners, Fiona Inamoto ’29, third-place Blue team, said that winning this competition will inspire and motivate her to continue to draw new things and carry out her passion for art. Additionally, Inamoto wants to earn points for her team in hopes that this will bring up her team’s place.

Helena Elko, one of Poly’s art teachers, believes that this competition mimics a real-world experience. Elko said, “The art competition was an incredible act of dedication and creative purposefulness on the part of the students who put it together.” She hopes that this platform for young artists at Poly Prep will continue over the years.

After this year’s competition, Fonstein shares her hopes for future visual arts competitions. There were a variety of entries this year, but she says that she would like to see a “wider range of media like sewing and sculpture” in the future. The products of the competition have been getting attention from the students, and Fonstein said she is “filled with happiness that people are taking an interest in the artwork in this competition.” As Fonstein is graduating this year, she says, “I will not be involved with next year’s art competition but I will be in contact with next year’s judges if they have any questions.”